Players make themselves at home in the Italian capital

Many of those tennis players who have already arrived in Rome ahead of the Internazionali BNL d’Italia have been making the most of their free time and taking in the sights, sounds and tastes of the Eternal City.

Stan Wawrinka, Milos Raonic, Roberta Vinci, Dominika Cibulkova, Andreas Seppi and Deborah Chiesa all had the opportunity to see some of the city’s most famous landmarks when they attended Friday’s draw ceremony, which took place under the archway of the Arco di Constantino next to the Colosseum. 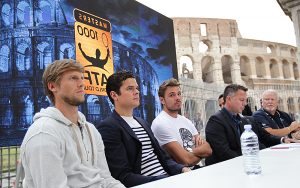 Maria Sharapova enjoyed a stroll around some of Rome’s streets.

Kevin Anderson and his wife made a whistle stop tour of some of the Italian capital’s most popular tourist destinations.

Rome wasn't built in a day, but we saw it in one! Excited for @InteBNLdItalia one of my favorite stops on the @ATPWorldTour! #tourists #roma pic.twitter.com/TnUqV8W9ek

Ivo Karlovic and his team enjoyed a famous Italian coffee.

Olympic champion Monica Puig was all smiles as she took in the view from the top of the Spanish Steps.

Sitting on top of the Spanish Steps! #WhenInRome 🇮🇹 pic.twitter.com/gX047Jm2VY

Julia Boserup has been admiring the night time views and sampling some of the local culinary delights.