It will be youth versus experience in the men’s final at the Internazionali BNL d’Italia as Alexander Zverev takes on Novak Djokovic for a chance to lift the trophy at the Foro Italico.

While Djokovic has tasted glory in the Eternal City on four previous occasions, for Zverev it is a first Masters-1000 final at the tender age of 20. He is the youngest player to reach the last two at a Masters-1000 event since his opponent won the Miami title in 2007 at the age of 19.

The Serbian has been in scintillating form all week and hasn’t dropped a set on his way to an eighth Rome final. While a 31st Masters-1000 title would be an early birthday present for the world No. 2, who turns 30 on Monday, Djokovic is aware of the threat the youngster poses.

“He’s in a great form. He’s 20 years old. His life and career are ahead of him. Of course I can relate to what he’s feeling right now. I have been in his shoes. I know how excited you feel before your first final of a big tournament,” said Djokovic. 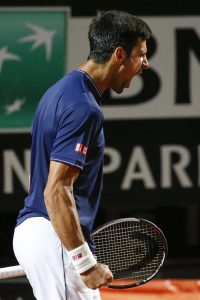 “It’s a great beginning of his professional career he had so far, and he deserves to be in the final, but I’m going to make sure he doesn’t get his hands on that trophy tomorrow. I’ll at least try.”

Zverev is looking to become the first German to win an Masters-1000 title since Tommy Haas at 2001 Stuttgart but knows it will be tough to defeat the 12-time Grand Slam champion and break the stranglehold the top 4 have over the Masters-1000 events.

“Novak, he’s one of the greatest players of all time. He is never going to be easy. Especially in a final when he already starts to have a rhythm. I think he played a great match against Delpo,” said Zverev.

It will be a first meeting for the two players.