John Isner and Fernando Verdasco got their 2017 Internazionali BNL d’Italia campaigns off to a winning start when they claimed victory in their opening round matches at the Foro Italico.

World No. 23 Isner caused an upset when he knocked out No. 14 seed and Monte Carlo finalist Albert Ramos-Vinolas. The American twice had to serve to stay in the match in the second set before eventually prevailing 67(4) 76(4) 61 in two hours, seven minutes. 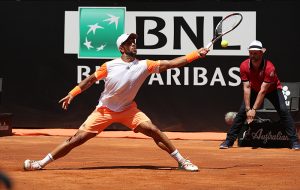 Verdasco had a more straightforward encounter, overcoming Donald Young 63 63 in just over an hour to set up a second round match against either No. 9 seed David Goffin or lucky loser Thomas Bellucci.

Fabio Fognini came through the all-Italian clash against compatriot Matteo Berrettini for the loss of only four games. World No. 1 and defending champion Andy Murray awaits the Italian in the second round.

In the only other main draw match to take place on Sunday, Jiri Vesely produced a clinical display to defeat Great Britain’s Daniel Evans 63 61. 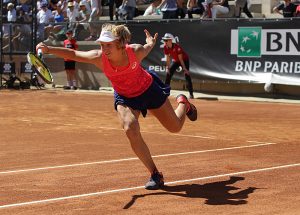 Qualifying came to an end with top seeds Jan-Lennard Struff and Daria Gavrilova making it through to the main draw. They were joined by second seeds Adrian Mannarino and Jelena Ostapenko but No. 3 seed Thomaz Bellucci was the highest profile casualty, falling to countryman Thiago Monteiro 63 76(3). As luck would have it, Bellucci still has a place in the main draw by virtue of a lucky loser spot.

No. 8 seed Jared Donaldson, who lost in straight sets in the final round of qualifying to Mannarino, is also guaranteed a lucky loser position and will take on compatriot Ryan Harrison in Monday’s night match on Next Gen Arena. The two lucky loser places are available due to the withdrawal of Marcos Baghdatis and Philipp Kohlschreiber.

Former top 20 players Andrea Petkovic, Nicolas Almagro and Kevin Anderson all booked their spots in the main draw after victories over Oceane Dodin, who reached the third round at Madrid last week, Alexandr Dolgopolov and Ernesto Escobedo respectively.