Anett Kontaveit dropped just four games in her quarter-final victory over No. 2 seed Caroline Wozniacki to cruise into the final four at the Internazionali BNL d’Italia.

It was a second straight Top 10 victory for the Estonian, who also defeated No. 8 seed Venus Williams in the third round. 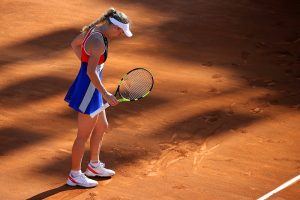 In an edgy start the two players exchanged multiple breaks and Kontaveit had break point for another before the Dane held to lead 3-2. That, however, was the penultimate game Wozniacki was to win in the match as the world No. 26 won the next three games to claim the first set and then took six of the next seven to secure the win.

Kontaveit hit 23 winners, many of them coming off her backhand side, and committed 14 unforced errors in the 6-3 6-1 match which lasted for 75-minutes. Her level was just too good for Wozniacki, who could only manage nine winners, and struggled on serve due to the 22-year-old’s aggressive returns.

“It’s definitely great to beat the world No. 2 and to be in semifinals for the first time. I’m definitely really happy and, yeah, very satisfied with the win I got today,” said Kontaveit. “I knew she [Wozniacki] was a fighter. I knew it was never over until we shook hands. And I just — I was thinking taking it really point by point. And I wasn’t going on court with really any expectations.”

This victory moves Kontaveit into her second clay court semi-final of the season where she will play defending champion Elina Svitolina for the first time.