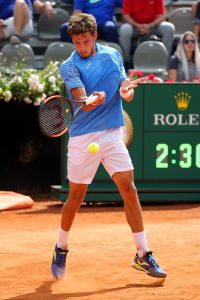 In a relatively straightforward affair, the No. 4 seed was impressive on serve – dropping just four points on his first serve in the opening set – and played some aggressive tennis to outplay his rival and claim a straight sets victory in 66 minutes.

It was a third straight triumph for Cilic over the Spaniard and puts him through to the final four where he will face No. 2 seed Alexander Zverev, who overcame David Goffin 6-4 3-6 6-3 in a late night encounter to remain on track to successfully defend his title..

“My first semi-final on clay in a Masters 1000 event. So that’s a good achievement. I was waiting many years for it happening, to make it. Definitely a happy moment for sure,” said Cilic.

“And the victory today, it was a great match. Serving incredibly well, both on first and both on second serve. That was extremely important. Gave me a lot of freedom in my game. When I’m serving that well, everything else is coming a little bit more naturally.”