Juan Martin del Potro’s straight sets victory over Kyle Edmund has set up a mouth-watering third round clash against Kei Nishikori. The Argentinean, who is playing at the Internazionali BNL d’Italia for the first time since 2013, needed one hour 45 minutes to see off the young Brit 75 64.

Both players possess a monster forehand but it was the more experienced Del Potro who was able to do more damage with his on Wednesday. The world No. 34 recognised Edmund’s talent however and was full of praise for the 22-year-old who put up a great fight and made it tough for the 2009 US Open champion.

“I never play before against Kyle, and he surprised me a little bit. His game is so good,” said Del Potro. “His forehand is good enough to be with a better ranking very soon, and I think he has good tennis to keep improving.” 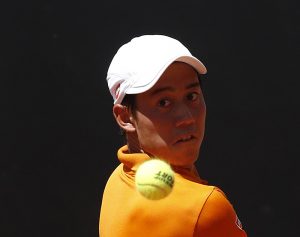 Nishikori put last week’s injury scare behind him to upend the Spaniard David Ferrer 75 62 in the second round.

The No. 7 seed was forced to withdraw from Madrid following his third round match over Ferrer and before he faced world No. 2 Novak Djokovic in the Spanish capital last week due to a right wrist injury.

However, on Wednesday at the Foro Italico, Nishikori was back to winning ways, producing an aggressive and accurate performance to defeat the former Roland Garros finalist in 81 minutes.

“I felt pretty good. It’s a little bit different condition from last week and here, so I got to make some adjustment,” he said. “In the match there was many up-and-downs, especially [during the] first set, but I think overall I played a pretty good match. Yeah, much better than last week. My wrist is okay now. I assume to be 100% now.”

The 2014 US Open finalist Nishikori is now 27-years-old and while he has won 11 ATP titles, he has yet to lift an ATP Masters-1000 trophy. However, he did win at Barcelona twice on clay.

“I think that I missed this chance in Madrid, Barcelona [he withdrew], and I got injured, my wrist. So it was a little bit shame because I love this clay court season. Hopefully I can make big jump to win Masters sometimes this year. That’s gonna be my goal, to win Masters or Grand Slam sometimes in the future.”

Nishikori and Del Potro’s third round match will take place on Pietrangeli Court on Thursday afternoon.