Novak Djokovic played almost perfect tennis as he trounced Dominic Thiem 61 60 to reach his eighth final at the Internazionali BNL d’Italia on Saturday. The Serbian won almost 75 per cent of his service points and committed just six unforced errors as he proved unstoppable in the 59-minute encounter.

Djokovic needed just 26 minutes to secure the first set, allowing Thiem just one game in the process. The second set followed a similar vein as the 12-time Grand Slam champion remained ruthless, breaking his opponent three times to record a bagel set and advance to the final at the Foro Italico once again.

“Undoubtedly the best performance of this year and maybe even longer. Yeah, I mean, what can I say? I’m overjoyed and happy with every minute that I spent on the court today, even with Del Potro and also now with Thiem. It was a perfect match. Everything that I intended to do, I have done it and even more,” said Djokovic.

“So there’s not much to say except that I am so grateful to experience something like this, because I have been waiting for it and working for it for a long time.” 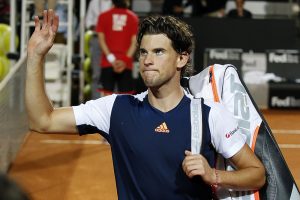 Thiem could not repeat the heroics of the previous day, which had seen him knock Rafael Nadal out of the tournament, and was struggling to win points as the world No. 2 bullied him from the baseline.

“Against Novak, it’s really tough for me to play, I mean, because he doesn’t give me any time. I don’t really like to play against him, because he has a game style which doesn’t fit me at all,” said Thiem.

“Yeah, then, also it was the first time for me to play on such a high level for three weeks or more, and today I paid a little bit the price for that.”

Djokovic, who had completed his quarterfinal match against Juan Martin del Potro earlier in the day, will face No. 16 seed Alexander Zverev in the final on Sunday.