Fognini advances to first quarterfinal at the Foro Italico

Fabio Fognini produced a disciplined display of tennis to defeat Peter Gojowczyk 6-4 6-4 and progress to the last eight at the Internazionali BNL d’Italia for the first time.

The Italian recovered from a wobble in the middle of the first set where he went down a break to win four straight games and clinch the opener 6-4. There was little to separate the two players in the second set and both had early chances to break, but it was in the tenth game when the tide turned in Fognini’s favour. 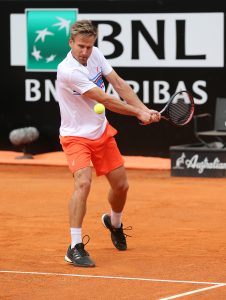 Feeling the pressure, the German served two double faults to bring up two match points and Fognini took his first opportunity, sealing victory with a forehand crosscourt winner in one hour 33 minutes.

It was a solid performance from the world No. 21, who knocked world No. 8 Dominic Thiem out of the tournament on Wednesday, and marked the first time he had won back-to-back matches since he lifted the trophy in Sao Paulo at the beginning of March.

Fognini will face either world No. 1 Rafael Nadal or Next Gen player Denis Shapovalov in the quarterfinals on Friday.