Jan Kodes and Mara Santangelo received the ‘Golden Racket’, a prestigious award which is presented annually at the Internazionali BNL d’Italia to a male and female great of the game, on Sunday at the Foro Italico.

Czech tennis player Kodes, who won Roland Garros in 1970 and 1971 and Wimbledon in 1973, was a three-time Italian Open finalist, finishing as runner-up in Rome in 1970-1972. He was inducted into the International Tennis Hall of Fame in 1990. 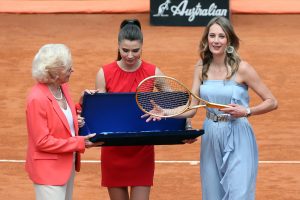 Santangelo was the first Italian woman to win a Grand Slam doubles title when she triumphed at 2007 Roland Garros with Alicia Molik and lifted the trophy at the Foro Italico with Nathalie Dechy the same year. A member of the Italian Fed Cup team, she defeated Kirsten Flipkens to win her singles match and force a decisive fifth rubber in the 2006 final, which Italy went on to win.

The two former players were presented with the award by Nicola Pietrangeli in special on court ceremonies.