Simona Halep booked her place in a second straight Rome final by defeating Maria Sharapova 4-6 6-1 6-4 in a pulsating semi-final encounter at the Foro Italico.

The top seed will have the chance to avenge last year’s defeat to Elina Svitolina when the two meet at the same stage of the tournament on Sunday. 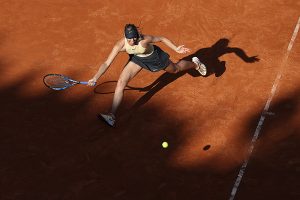 Halep and Sharapova’s head-to-head suggested it would be a hotly contested affair and it didn’t disappoint. Lasting two hours 23 minutes, the 4-6 6-1 6-4 encounter was full of twists and turns, pulsating rallies and many, many breaks.

Six consecutive breaks of serve started the match but it was Sharapova who settled quicker. She found her range from the baseline and was on fire in the return games, breaking Halep five times in the opening set to take a 6-4 lead.

Some sage words of advice from coach Darren Cahill at the change of ends resonated with Halep and she jumped to a 2-0 lead, holding serve for the first time in the match in the process. Her return game improved and signs of fatigue were showing in the Russian, who had spent more than seven and a half hours longer on court this week than her opponent.

While the service games remained close it was Halep who was winning the crucial points and soon found herself 6-1 up and having levelled the match. 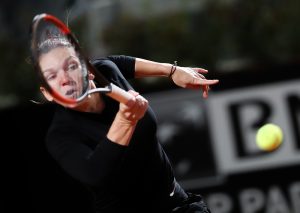 Another momentum change followed as Sharapova opened the decider with a break. Her advantage was short-lived however as the rallies intensified and Halep broke back. The Romanian was proving tough to beat in the long rallies and secured edged ahead again.

Sharapova kept on battling, going for the lines with her heavy forehand and her best, flat two-handed backhand and recovered the break. The pair exchange breaks yet again and were tied at 4-4 when Halep pushed on, going deeper on her shots to gain the advantage and break her opponent in the 10th game to triumph.