Rafael Nadal, Alexander Zverev and Novak Djokovic moved through to the third round at the Internazionali BNL d’Italia following comfortable victories over Damir Dzumhur, Matteo Berrettini and Nikoloz Basilashvili respectively on day three.

World No. 2 Nadal needed just one hour to see off Dzumhur 61 60 in a one-sided match on Court Centrale. It was a first meeting for the pair on clay and it showed, the Bosnian player unsure what to do against the world’s greatest clay court player as he struggled to get a foothold on the match. The world No. 31 looked uncertain of his game plan and had no answer for Nadal’s aggressive tennis, allowing the seven-time Rome champion to control the points with his forehand.

Nadal looked sublime, going after his shots and displaying his traditional deep powerful groundstrokes as he eased into the next round where he will face Robin Haase or Denis Shapovalov.

“Yeah, a positive match, of course. Good start here. It is important, after a loss in Madrid, it’s important to come back strong. And that’s what I did today,” said Nadal.

“I went on court with the right intensity. I don’t know how many mistakes I did, but not much. And having the control, more or less, of a high percentage of the points. So that was the way that I want to play. And today was a positive day, of course.”

Reigning champion Zverev overcame a spirited display from Italian wild card Berrettini, who played a much higher level of tennis than his world ranking of No. 103 would suggest, to secure a 7-5 6-3 victory and extend his winning streak to 10. 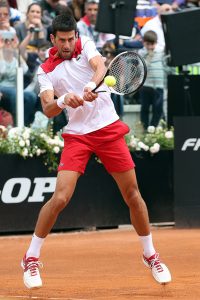 It was a similar affair on Next Gen Arena where Djokovic eased past qualifier Basilashvili 64 64. While it was a close first set, with the Georgian holding four break points, the second was much more straightforward. The No. 11 seed secured a break to love in the opening game and remained in control, clinching victory after 77 minutes.