Next Gen stars Tsitsipas and Tiafoe advance in qualifying

Next Gen players Stefanos Tsitsipas and Frances Tiafoe battled back from a set down to advance to the final round of qualifying at the Internazionali BNL d’Italia on Saturday.

A final set tiebreak was required to separate top seed Tsitsipas from Mikhail Kukushkin. The 30-year-old Kazakh showed all his experience as he pushed the Greek player to the wire but it was the 19-year-old, who reached the Barcelona final last month, who held his nerve to secure a 57 63 76(5) victory.

No. 4 seed Tiafoe, who plays here on a career-high ranking of No. 56, needed two hours and nine minutes to see off Italian wild card Salvatore Caruso 36 75 64. His second round opponent, Viktor Troicki, has withdrawn from the tournament with a back injury so Tiafoe is guaranteed a place in the main draw at the Foro Italico for the first time without having to play another match.

Caruso was one of eight Italians to taste defeat on the opening day. The only host nation players to progress were Camila Giorgi, who prevailed 62 63 in the all-Italian clash against youngster Deborah Chiesa, and Filippo Baldi who upset No. 6 seed Marton Fucsovics after a lengthy three hour 10 minute encounter. 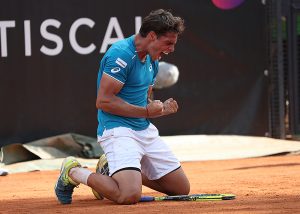 World No. 368 Baldi showed tremendous courage and determination as he came back from 3-5 down – and saved a match point – in the final set to win four games in a row and oust the Hungarian, who is ranked over 300 places higher than him.

It was a more straightforward affair for women’s top seed Aleksandra Krunic, who overcame China’s Wang Yafan in straight sets, and No. 4 seed Danielle Collins, who dropped five games to compatriot Varvara Lepchenko. 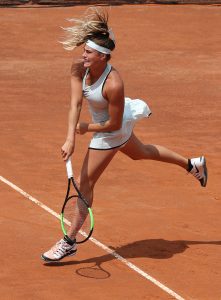 Aryna Sabalenka, the No. 2 seed, was pushed all the way by Alison Riske, eventually securing a 63 16 63 triumph, while it was a similar story for Alison van Uytvanck, who needed almost two hours to find a way past Bethanie Mattek-Sands 75 16 61.

On the men’s side, second seed Joao Sousa, who is full of confidence having won the title on home soil in Estoril last month, recorded a second set bagel on his way to victory over Horacio Zeballos. No. 3 seed Mischa Zverev only required 65 minutes to see off Italian wild card Andrea Pellegrino 61 62 and set up a second round clash against Federico Delbonis, a two-time ATP clay court titlist, who trounced Brit Cameron Norrie 62 60.

The quickest match of the day took place on Court 1, where 36-year-old Julien Benneteau crushed Italian wild card Liam Caruana, a player who is 16 years and 359 ranking places below him, 62 60 in 51 minutes.

The second round of qualifying gets underway on Sunday at 11am.