Players find their feet in Rome

With the start of the Internazionali BNL d’Italia just days away, players have been flocking to the practice courts at the Foro Italico. Among the early birds on Friday morning were 1999 champion Venus Williams and 2008 runner-up Stan Wawrinka, who spent time getting used to the conditions on Campo Centrale and Campo Pietrangeli respectively. 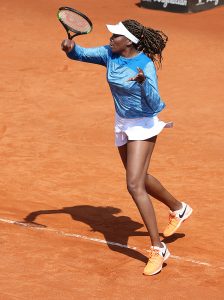 David Ferrer, who reached the final here in 2010, Kei Nishikori and Richard Gasquet also took to Campo Pietrangeli while Barcelona finalist Stefanos Tsitsipas is due to spend time on the same court later today as he prepares to make his debut at the tournament.

The gates are open to the public which allows fans, including many schoolchildren, the chance to watch some of their favourite players in a more relaxed atmosphere. Friday’s practice schedule is available to view on the website.

The draw for the 2018 Internazionali BNL d’Italia takes place at 6.30pm this evening at Campo Pietrangeli.