Denis Shapovalov added another notable scalp to his ever-growing résumé when he battled past former world No. 4 Tomas Berdych 1-6 6-3 7-6(5) in the first round at the Internazionali BNL d’Italia.

The 19-year-old, who recorded an impressive run to the semi-finals in Madrid last week, bounced back from a disappointing first set to force a decisive third set tiebreak where he held his nerve in an edgy contest to claim victory.

Berdych quickly found himself 5-0 up at the start of the first set as his Canadian opponent struggled to find his game. The Czech player showed all his experience as he took advantage of an out-of-sorts Shapovalov to win the opening set 6-1.

It was an entirely different affair in the second set as Shapovalov began to find his range and his forehand started firing. He broke for a 3-1 lead and went on to survive a seven-minute game at 5-3 to clinch the second set when Berdych netted a cross-court forehand. 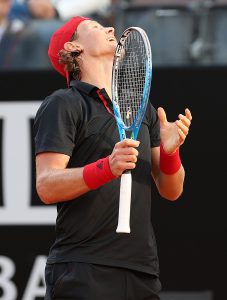 Shapovalov continued his incredible shot-making in the third set as the two players battled to gain an advantage. In a tense encounter Shapovalov had Berdych on the ropes at 0/30 4-4 while shortly afterwards the Czech turned the tables and came within two points of the win.

In the end it came down to a tiebreak which the Next Gen player looked to be going to win with ease as he won the first four points. Berdych fought to bring it to 5-5 before the world No. 29 pulled away again to secure his first victory at the Foro Italico.

“I wasn’t tired. I just couldn’t find my footing the first set. The clay is so different here. I haven’t had really a chance to practise alone on the court, so I couldn’t really get my timing,” said Shapovalov. “But, yeah, just kept fighting. You know, kept competing. And I’m really happy I got to turn the match around.”

The win ensures Shapovalov will become the new Canadian No. 1, taking over the top spot from Milos Raonic, when the new rankings are announced on Monday.

“That’s pretty crazy, actually. It’s something I’ve wanted to work towards for all my life. So, to actually do it –I had no idea I was able to reach it, honestly. So, to be able to do that, yeah, it’s pretty crazy,” said Shapovalov. 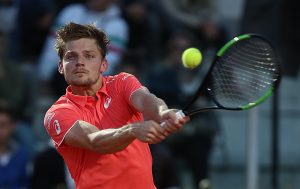 David Goffin also had to fight back from a set down to earn his place in the third round. He won 12 of the last 14 games to overcome Italian wild card Marco Cecchinato 5-7 6-2 6-2 in two hours four minutes.

Earlier in the day, Borna Coric was forced to retire with a neck injury when trailing qualifier Stefanos Tsitsipas 4-1 on Court Pietrangeli. The Greek 21-year-old, who reached the final in Barcelona last month, will now play Juan Martin del Potro with a place in the third round at stake.