Maria Sharapova’s first round clash against Ashleigh Barty, Marin Cilic’s night match versus Ryan Harrison and Angelique Kerber’s meeting with lucky loser Zarina Diyas are just three of the matches to look forward to on day two at the Internazionali BNL d’Italia.

Rome has been a happy hunting ground for Sharapova in the past and she will be hoping to produce the kind of form that took her to the title here on three previous occasions when she faces the No. 16 seeded Australian for the first time on Next Gen Arena.

Also on Next Gen Arena on Tuesday are Italy’s Filippo Baldi, who caused a stir when making his way through qualifying at the weekend, and his compatriot, the wild card Lorenzo Sonego who thrilled the crowd with a three-set victory over Adrian Mannarino in the first round on Sunday. They will face Nikoloz Basilashvili and Peter Gojowczyk respectively.

No. 4 seed Cilic withdrew from the tournament in Madrid last week due to a knee injury but is confident he is fit and ready to start his quest for the title here. 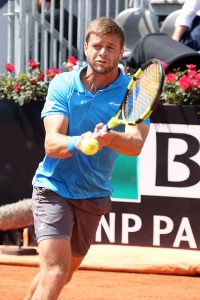 Cilic’s match against Harrison, who is bidding to record back-to-back victories for the first time since February, completes Tuesday’s session on Court Centrale. Earlier in the day the main show court will feature No. 16 seed Lucas Pouille versus Italy’s Andreas Seppi, No. 15 seed Tomas Berdych against the exciting Next Gen star Denis Shapovalov, and defending champion Elina Svitolina who will play Petra Martic. Reigning Roland Garros champion Jelena Ostapenko is also in action against Zhang Shuai.

Elsewhere around the grounds crowds will have the rare opportunity of watching Venus Williams play doubles with someone other than her sister Serena, as she pairs up with Madison Keys to face the Czech duo of Barbora Krejcikova and Katerina Siniakova on Court 2.