Svitolina remains the Queen of Rome

It was a commanding performance from the No. 4 seed who faced little resistance from Halep in the first set but who remained focused when her opponent upped her game in the second. 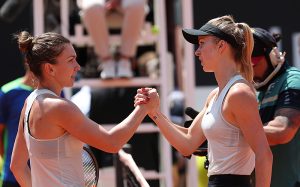 The opening set was one way traffic, Svitolina was firing from the baseline and playing near flawless tennis while Halep couldn’t get into the match. Despite a first serve percentage of 76, the Romanian won just 15 percent of her first serve points in an error-strewn opener which saw her claim eight points.

The top seed was understandably down on herself when she received a visit from coach Darren Cahill at 0-5 and while he encouraged her to reset and work herself into the points it was too late to save the first set which was over 6-0 in just 19 minutes.

Halep regrouped to start the second and promptly held serve to claim her first game of the match. She then showed encouraging signs by taking Svitolina to deuce in her first service game.

Some excellent defending and an impressive backhand winner earnt Svitolina a break to lead 2-1 and from then on the games remained on serve. Halep was forced to stave off three break points when returning to court after a medical timeout at 3-2 and began to apply some pressure of her own onto the Svitolina’s serve but it wasn’t enough to even earn a break point.

Although Svitolina wasn’t hitting as deep, she continued to go for her shots towards the end of the match and was impressive as she held her nerve to serve out the match.

“I think I dominated all the match. I was trying to put lots of pressure on Simona with my game, tried to really take the ball early and to, you know, open the court,” said Svitolina.

“It worked really good today. I was feeling good. So, you know, I think it was good match for me.” 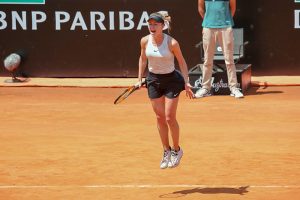 It’s a third trophy of the year for the Ukrainian, who also triumphed in Brisbane and Dubai, and means she has now won her last eight finals. The victory also ensures she remains in the top 5 when the rankings are released on Monday while Halep will remain at world No. 1.

“I think I was a little bit tight and the muscles were a little bit stiff. I couldn’t run. Because I knew that I have to run in this match,” said Halep. “I didn’t start well. Maybe I was rushing a little bit. She didn’t miss. I missed in the first set. But then the match was a little bit better. And it’s good that I could finish strong.”