Dominic Thiem outmuscled Rafael Nadal 64 63 to send the seven-time Internazionali BNL d’Italia champion crashing out of the tournament at the quarterfinal stage.

It was a first clay court defeat for the Spaniard in 2017 and brought his run of 17 straight victories to an end. For Thiem it was revenge for straight set defeats in the finals of both Barcelona and Madrid.

The Austrian had Nadal in trouble from the off with his heavy hitting earning an early break. He won five of the first six games to shoot to a 5-1 lead and despite a brief fight back from the Spaniard, the No. 8 seed had soon secured the opening set. 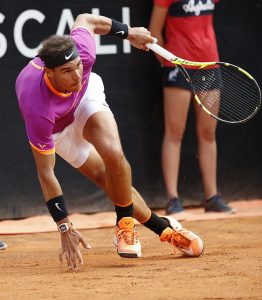 Thiem maintained his outstanding level in the second set, showing immense power and incredible mental strength as he continued to pile the pressure on his opponent. His aggressive play eventually resulted in a break at 4-3 and he went on to win the next two games to stun the 14-time Grand Slam champion.

“I came in with a very aggressive game style, because I knew that if I want to have a chance, then I have to do something different and be more aggressive,” said Thiem.

“I knew that if it goes in, everything, maybe I have a chance. If not, maybe I also lose easy. But today was one of these days where I really felt the ball great on the racquet, and a lot of risky shots went in. It was a very, very good performance and I think probably one of my best matches.”

Thiem will play either Novak Djokovic or Juan Martin del Potro in the semifinals. Djokovic was leading 61 1-2 when their match was suspended due to heavy rain on Friday evening.

“He played very aggressive, hitting the ball very strong,” said Nadal. “The court here is probably the smaller on all the center courts on clay, so that’s makes the players who play with bigger serve and hitting the ball strong, you know, is a little bit more easier for them to see the option to hit winners.

“So he did it. He played very long. He didn’t miss a lot. Played high intensity.”